The images that we see before sleep often recur in our dreams. In Steve Pikelny’s upcoming project, I saw it in a Dream, he explores a vision that came to him one night, while in the midst of working on a larger project.

With retinas burning from hours of working on variations of 20 circular/star shapes, he envisioned hyper-saturated versions that reminded him of The Who’s Tommy album cover. The visions were inspiring enough to break from his larger project, and launch this as an Art Blocks Factory project in early July.

Pikelny is active in the Art Blocks and Squiggle DAO communities (@steviep), having previously released a 180-piece collection CryptoGodKing on the Art Blocks Factory platform in early April 2021. That project prominently featured triangles/pyramids as well as an eye in the center.

In the project’s testnet gallery, an eye shape is also apparent in many pieces, though it’s an unintentional linkage between the two projects, according to the artist. It’s hard not to see some link in the style between the two, in a way that gives the pieces each some of the same signature style.

Aside from his Art Blocks projects, Pikelny has developed a number of experimental websites that show off his programming skills, as well as sense of humor. He launched FashCashMoneyPlus.biz in 2017, as a bogus website to claim free money as an alternative to cryptocurrency scams. More recently, he developed RonaMerch.co, which sells pandemic-inspired merchandise from an always-moving, over-the-top custom site with impressive motions and design.

Pikelny shared some of the inspiration behind the new project, as well his journey into generative art and more in the answers below. 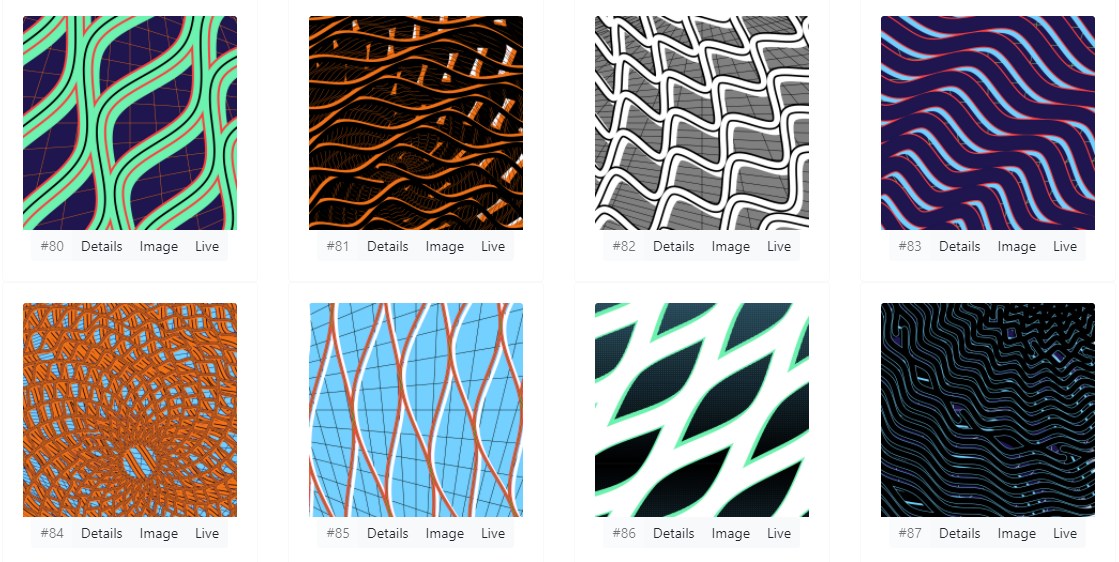 Q: What inspired your I Saw It in a Dream project?

This project actually came about in a sort of round-about way. For the last few weeks I've been working on a larger project that leans heavily on generating Guilloché patterns, and it's involved a lot of prototyping and experimenting with different techniques.

So I have a file with maybe 20 different variations of weird circle/star patterns, and one night I was staring at this and messing around for several hours right before I went to sleep. So when I actually decided to go to sleep I closed my eyes and my retinas were still buzzing with a hyper-saturated version of this pattern. It looked sort of like the album cover to The Who's Tommy with a purple stippled background, with notes of minty green and burnt orange. And it looked pretty cool!

Even though I have a no-reopening-computer-after-going-to-sleep policy I wrote some notes down and revisited it the next day. Thankfully one of my prototypes matched up with what I saw, so I iterated on it a bit and ended up with something I really liked.

So really, the name of this project is kind of a lie. But "I Saw It In A Dream" sounds a lot cooler than "I Saw It Before I Fell Asleep", so here we are.

Q: How does this project relate to the bigger project you're working on?

I think conceptually there's almost zero overlap. And visually there's also very little overlap aside from the use of a vaguely similar circular pattern.

But mathematically there's some similarities. I'm relatively new to the p5js and generative art space, so in a lot of ways I'm relearning all the math that I learned in highschool and haven't used since. So, a lot of trigonometry and playing around with circles.

Q: What's been your path into generative art?

I guess it started soon after I began writing software professionally, and it occurred to me one day that I could also use code as a creative outlet. So I ended up building a lot of weird shit with html, css, and javascript, some of which had generative aspects to them.

Then I took a hard left turn into building a series of strange elaborate websites that all refer to each other (most notably: fastcashmoenyplus.biz, ronamerch.co, friendworld.social, and fakebullshit.news). And even though those sites are more conceptual, there are plenty of visual elements that I'd find useful later on.

Then last December rolls around and I'm feeling pretty uninspired, but a friend of mine shows me Art Blocks and CryptoVoxels. I was pretty blown away with it all, so I immediately put in an application to do a project with them. And a few months later the NFT space blew up, so by the time they got back to me I had a million ideas floating around.

And for the last few months I'd say making generative art has been my primary hobby, which has been great and fairly addicting.

Q: Who influences your work?

I think it really depends on the project, but I think this project specifically feels a bit surrealist and pop inspired. A couple of the test mints from "I Saw It in a Dream" definitely look pretty Lynchian.

Another artblocks artist, Eliya Stein, told me that he saw shades of Alex Grey in there, which makes sense given that I'm a big fan of the whole new agey, woohoo bullshit kind of aesthetic.

I also think there's a lot of cross-pollination going on in Art Blocks at the moment, so I'm definitely influenced pretty heavily by that community in terms of colors, techniques for creating variation, etc.

I saw it in a Dream will launch on the Art Blocks platform on July 7 at 12pm ET. Final mint size and price to be determined by artist. Check the ArtBlocks site for details.

Preview the project on the Rinkeby testnet.