Luke Shannon to return with followup to The Opera

Luke Shannon, the artist behind The Opera, is returning to Art Blocks Factory in late July 2021. The original 256 piece collection was released in early May 2021 and has gained a strong following among Art Blocks collectors.

With never ending movement, the soul - or souls if you’re fortunate enough to hold one of those 52 rarer pieces - dances and twists across a background decorated in morphing circular shapes and vertical patterns. The color palettes add a mood to each that ranges anywhere from glee & play to dark & haunting.

Shannon plans to launch his next project later this month and is hesitant to give away details at this point. He was able to share insight about his previous project, his background, and inspirations as an artist. 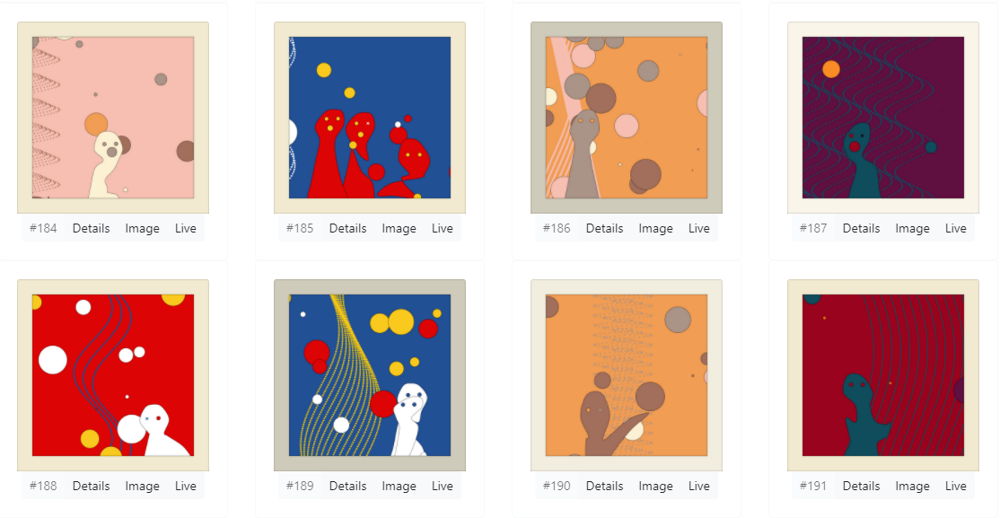 A lot of things are still up in the air, so I don’t want to give too many details because things might change drastically by the time it’s finished. But I’m aiming to release it in probably about a month or so, and I’m excited about what I have so far.

So far it’s looking a lot more black and white and a lot finer lines than I was expecting, and I think I’m going to have to be a lot more selective with colors to get that right. I think the scale of the world in the piece is also going to be different from the Opera, a mix of microbial stuff and bug stuff should be in there.

How does your new project relate to The Opera?

I’m unsure. I think there will be some lines for comparison for sure, but nothing too derivative. I’ll probably remake a lot of the palettes, definitely a different overall look. I think ideally the feeling I get from it is similar, but from a different system. Although there might still be some Opera characters in it, I haven’t decided yet.

What's been your path into generative art and NFTs?

Well, I started with sketching and painting from a very young age, probably since early elementary school. Then I added fiction writing, and until a handful of years ago my dream was to become a novelist.

Then I started coding, and for me it scratched the exact same itch as fiction writing and poetry. The specificity of language, the problem-solving, the syntactical restraints, the optimization, and my growing interest in math and physics combined and all of a sudden I loved coding.

And then I found generative art, and everything came together. The visual outputs and choosing of colors is perfect for the painter in me. The problem solving and optimization of code definitely pleases the mathematician in me, and the combination of rules and randomness pleases the physicist.

But probably the part of me that is happiest doing generative art is the storyteller, because good generative art doesn’t just describe a single story, but an infinite range of stories, a story from every angle.

To take the Opera as an example, the code doesn’t just describe the perspective of a single actor, but it describes all of them together. And if I could read how the computer reads then I would be able to appreciate the code even more than any one output of the program.

Who influences your work?

I recently came across Ruth Asawa and some of the work she did at Black Mountain College and thought “Wow I wish I could do something like this.” So I’m trying a little bit!

I also bought the obligatory “Interaction of Color” by Josef Albers, so that is going to be a focus for me. And Manolo Gamboa Naon has some of the most incredible stuff ever. I really don’t understand how he is so good.

I’ve been taking ideas from lots of places though, sometimes I see something online or in nature or in my friends' art and try to make my own version of it and that leads to lots of great ideas, and there definitely are going to be a lot of things that have come out of that process in my next project.

What's changed about your approach to creating a project for Art Blocks since The Opera?

There’s definitely a lot more pressure now… It’s been kind of nerve-wracking because almost everything I make I think “Oh no, this isn’t good enough for Art Blocks,” or “I can’t release this online.”

That’s been a bit of a block sometimes, but a motivating factor at other times. In terms of the art itself, I’m trying to put a real emphasis on choosing color palettes and widening the output space as much as possible. I’m excited!