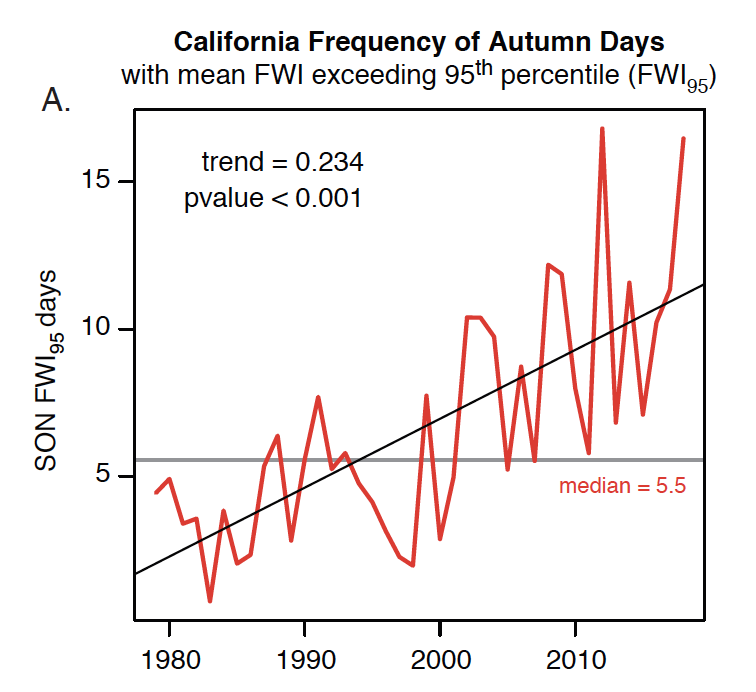 By Daniel Swain at Weather West

As it turns out, the short answer is…yes: we found that climate change has already more than doubled the frequency of extreme autumn wildfire conditions in California over the past ~40 years. This finding is based on observed changes in the frequency of occurrence of autumn days exceeding the 95th percentile of the historical Fire Weather Index (FWI). The FWI gives a quantitative estimate of the severity of wildfire risk using a multivariate suite of meteorological data (including temperature, humidity, wind speed, solar radiation, and vegetation “fuel moisture” (which itself incorporates antecedent weather/climate information)). Overall, mean September-November FWI in California increased by about 20% between 1980 and 2018—a trend that was distributed fairly uniformly across the state, including both coastal and interior regions in the north and south. We further found that the occurrence of extreme FWI days was strongly associated with days on which large wildfires occurred—strengthening the link between increasing FWI and the severity of actual fire conditions on the ground.

Much can also be done to improve the resilience of communities as well as individual structures to wildfire hazards. While the oft-promoted notion of “defensible space” is a good place to start, recent evidence suggests that other interventions are even more effective—including fire-resilient building materials and methods. At larger scales, communities can be designed to better resist fire (by incorporating greenbelts or fuel-reduction corridors, for example). Improved evacuation planning and communications infrastructure can make worst-case scenario firestorms less deadly by making it easier to leave affected areas in a safe and timely manner. And there has also been progress toward reducing high-risk wildfire ignitions during extreme wind events—via “Public Safety Power Shut-Offs” by electrical utilities—although such interventions remain highly disruptive, societally inequitable, and probably unsustainable in the long run due to our warming climate.